The Fountain of Youth TV, radio and print campaign that started in mid-January this year is similar to 2005’s 10 Most Wanted Car Killers campaign featuring Bobby Likis. Last year’s campaign had a strong emphasis on the testimonial of a car expert, which gives credibility to a new-product message. The exact schedule of when the TV spots run is listed on BG’s Nexus site. The point of purchase material is keyed on four major fluid services: Power Steering, Coolant, Fuel and Transmission. There was a concerted effort to have a consistent family graphic look across the campaign, says BG’s Mike Moen. “We wanted the look and feel to be easily transferable from TV spots to P.O.P. material in a waiting area or on the service lane. A glance at the poster or pamphlet shows that this is a BG service with the same Fountain of Youth branding benefits they saw on the commercial aired nationally on FOX News or The Golf Channel.” 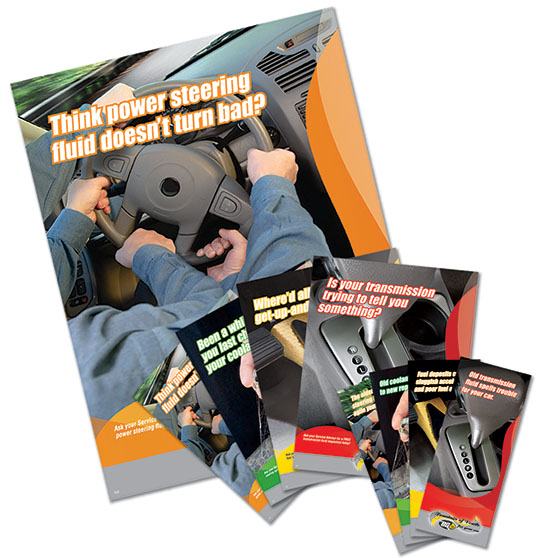 Can you describe BG in five seconds? Go…
Five-second sponsorships are an added benefit of being the main sponsor of any broadcast. Although quick and not by any stretch the whole story, it’s a way to brand a major benefit of BG Products and each of its services, all in five seconds or less. This past month BG sponsored the Barton Classic Canadian Golf Tournament on The Golf Channel. The announcer says “Our program is sponsored by BG Products: Discover the Fountain of Youth for your car at bgfindashop.com.” Time’s up. This is not the whole story of course, but rather is used to punctuate the information they see in the TV spot running in the same segment, minutes earlier. The Fountain of Youth campaign attempts to drive home a clear benefit of longer life for vehicles, the fastest depreciating asset we own! In the words of advertising guru Roy H. Williams, “Effective ads should be like a rhinoceros: they make a single point, powerfully.”

Lookin’ good
“The results have been immediate,” Moen said, with the response consistent with the 10 Most Wanted Car Killers. “The audience understands the next step in the campaign, and feedback measured by ZIP code searches on bgfindashop.com after a spot runs it continues to stay strong. “In fact, the searches are so strong that we can tell when the spots run based on such significant spikes in the ZIP code searches for one hour following the airing of a spot‚” Moen said. Ponce De Leone never did find his fountain of youth, but car owners can find one for their car at bgfindashop.com! Spread the word.