The long-time shadow over automotive engines is hitting certain models of Saab, Dodge/Chrysler, Toyota/Lexus and VW/Audi automobiles hard. Amid a swelling roar of complaints from enraged owners, many of the automakers are voluntarily extending warranties and replacing engines, some with as few as 20,000 miles on them. Some take a tougher line and blame owners for not taking care of their cars.

Automotive News magazine tells of a sludge sufferer who says his claim was turned down because he changed his oil 36 miles beyond the stated interval. Another said he was accused of deliberately dumping debris in his engine.

Some OEMs blame customers for not changing their oil frequently enough and say they are protecting themselves from customers who abuse their vehicles, such as lessees and rental fleet owners.

The replacements
VW/Audi has warned 426,000 VW Passat and Audi A4 owners about the problem and is extending its warranty and replacing engines for no charge to the customer for as much as $11,000 a car. Affected are 1.8-liter turbocharged four-cylinder engines on 1998–2004 Passats and 1997–2004 A4s.

Toyota has made a running production change in its 3.0-liter V-6 engine that lets oil drain faster into the sump. It also said it will pay for sludge-related repairs for eight years from the date of purchase for all 1997–2000 cars with the engine.

Automotive News says that sludge is a customer-relations headache for the affected carmakers as their customers besiege them and the Center for Auto Safety, a watchdog agency in Washington, D.C., looking for help.

After being a lone voice in the wilderness for so long, it is encouraging to see OEMs agreeing with something that BG has been identifying and warning people about for many years.

The plot and oil thickens
“Thin oil sheds heat, thick oil holds in heat,” says Mike Belluomo, BG technical services manager. “Much as churning breaks down the fat and turns cream into butter, oxidation degrades and thickens oil as it picks up other contaminants such as dirt, silicon, metal particles and moisture. Then it doesn’t have its original slickness to lubricate and holds even more heat, further damaging the engine.”

BG knows it can’t control the quality of every motor oil in the market. But…it can help them do better. BG MOA® adds higher levels of anti-oxidants‚ detergents, and anti-corrosion agents to prevent engine oil breakdown. Most oil manufacturers do not put as much of these beneficial additives in their oil as they could. “These components allow oil to defend itself 100 percent more aggressively. We can’t stop the process of oxidation, but we can sure slow it down,” Mike says. BG MOA® helps the oil last longer and allows a car owner to get fewer oil changes with the same protection. 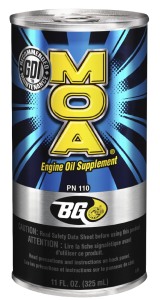 Sludge susceptibility
So why don’t all engines gunk up with sludge? “There are several factors,” Mike says. “The engine may not have been designed with enough capacity to cool the oil. Sometimes, for cost and fuel efficiency purposes, engineers try to make a small engine work as hard as a larger one, creating more heat. Maybe the owner hasn’t changed the oil often enough for the driving conditions. And lower-quality oil breaks down faster than premium oil, giving less protection.”

With sludge being the usual suspect showing up on OEM warranty claims, this is the time for service writers to communicate the benefits of BG MOA®.