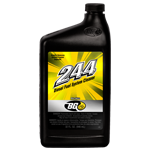 Problems due to pitch around injectors on common rail engines

We have had some problems with leakage around the nozzle injectors on certain diesel engines. A layer of carbon has been building up around the injectors. It looks like thick oil or like a black plastic cover has been melting.

The substance is black, shiny and hard as rock. It is a mixture of carbon, diesel and oil vapour. We have used countless hours trying to get rid of this. In some occasions we even had to exchange the engine because we have not been able to loosen the injectors.

I have tried numerous products, both mechanical and chemical. I have even tried very expensive products without any results. But on a car repair exhibition I met a man who showed me a very different product. At first I thought: “Well, I’ve heard this before.” But then I realized that this was worth trying. So I ordered some bottles with BG 244®. When the next car came in a week later I told the mechanic that we were going to try something new. We mixed BG 244® and diesel 50/50 and poured it on and around the injectors. After 15 minutes the mechanic came back with a big smile on his face and the injectors in his hand. BG 244® fixed our problem in no time.

After we started to use BG 244® there has been no need to demolish any injectors or cylinder heads. From now on we will only be using BG Products.