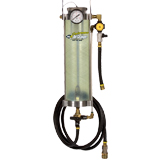 BG’s Performance Oil Change Service, utilizing the BG Performance Oil Changer, PN 9800, takes a required service and perfects it, playing to BG’s strengths. This service utilizes premium cleaners and oil/fuel additives, attaches simple application tools at the oil filter mount, utilizes engine operation heat and the convenience of shop air to replace all the old oil and compression-robbing contaminants with new lubricant. This is not only a very marketable service, it’s unique to the industry.

“By stripping the fuel gums off of the rings,” says BG’s Eddie Bash, “you stop oil blow-by, even out compression and generally improve how the car idles and runs.”

As Bobby Likis points out on his radio and television shows, it gives the car owner a baseline on a used vehicle so they’ll have a clean measure and starting point for evaluation.

Mike Belluomo in the BG Lab sees the “Wow!” factor for customers when shops utilize two different products, one for oil and one for fuel, to both clean and remove deposits as part of an oil change.

One of a kind
BG Vice President Harold Erwin says this industry unique tool purges the system of old oil and restores like-new compression to all cylinders.

“This isn’t the first device to blow the oil out of an engine, but it is the first to clean and replace oil in the hard-to-reach areas so the engine has instant lubrication when it is restarted. And you’re adding maybe five minutes to an oil change.

“It has been difficult and time-consuming to clean these deposits and get rid of all of the old oil,” Harold says. “The BG 109 chemistry dissolves fuel gums that form around the rings, restoring and balancing compression in all of the cylinders.”

Out with the old
With BG’s new tool, the old, contaminated oil is blown out with pressurized air. “The result is the most complete oil change ever provided as a regularly scheduled maintenance service. As much as 15 percent more oil is removed,” Harold says. “No one doing oil changes at car dealerships, independent garages, or quick lubes was doing anything like this before.”

But more and more are. “Most of the sales have been to new car dealerships and independent garages. We have 400 units out there now. The machine it replaced, the BG PF12, we were selling 10 to 12 a month. We’re now doing 75 to 100 a month.” A marketing/training video is shipped with the unit.

The BG Performance Oil Changer also is being marketed to aid sludge control, “A major problem with many engines today as the manufacturers continue to cut back on crankcase ventilation to improve tailpipe emission,” Harold says.

BG has had the chemistry to clean behind the rings for years, but the BG Performance Oil Changer “is the best product for this we have ever put together.”

The new tool will be featured in upcoming issues of both Motor and Motor Age magazines. It was demonstrated at the April conference of the American Oil Change Association in San Diego.

They like it simple, fast
Ralph Shattock, BG field trainer at the conference, says attendees liked that the 9800 is simple, easy and fairly foolproof. He passed on the names of those interested to distributors. “I haven’t seen anything comparable,” Ralph says.

The fast and extensive cleaning power of BG 109, the BG Performance Oil Changer’s oil evacuation and the friction-fighting prime of BG MOA® are each in their own right valuable services. Combined, they constitute nothing less than a new triple threat in the competitive marketing of oil change services.

Customers will appreciate the fact that it takes only a few extra minutes to give their engine a fresh start. It only makes sense. Why just drain when you can have a BG Performance Oil Change!