With diesel fuel prices at historic highs, desperate drivers are scrambling to find ways to stay on the road.

Would you like fries with that?
The hottest new hope is biodiesel, a general term given to non-petroleum fuel produced from renewable resources, such as animal fats and vegetable oils. The Consumer Energy Council of America says that in the U.S., roughly half of biodiesel production uses soybean oil, and most of the remaining half is recycled from restaurants’ cooking oil. In fact, restaurant owners have to lock up their waste fry grease to protect it from thieves. 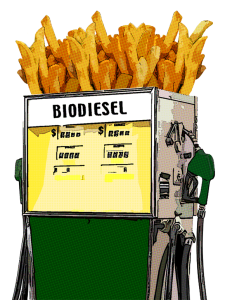 But, Mike says, biodiesel must be chemically treated because it attracts moisture; which can degrade fuel and cause microbial growth. It can also oxidize in storage. And it can plug fuel filters and injectors, which has been a major problem, when the glycerin that is supposed to be stripped out in refining isn’t. This can cause catastrophic fuel system failure. It’s like bacon grease solidifying in the skillet. Imagine trying to run that bacon grease through a fuel filter and pump.

Do you know what’s in your tank?
A problem with switching to biodiesel, Mike says, is that even though most biodiesel fuels meet the standards of the American Society of Testing Materials, www.astm.org, the user can’t be assured that it wasn’t distilled in someone’s backyard and sold as the real stuff.

“Unfortunately, we have seen a lot of people collecting used cooking oil and grease from restaurants and using it to make biodiesel in their garages or sheds. Biodiesel ‘kits’ can be purchased easily on the Internet along with instructions for the production process. Set it up and you are now a fuel producer.”

Biodiesel has its good points and its not-so-good points. It produces lower emissions, is renewable and can be sent through existing fuel lines (www.solarhome.org).

Mike points out some of the advantages and disadvantages of biodiesel:

There’s a solution!
With more than 250 million gallons of biodiesel sold in the U.S., the need for a fuel conditioner is greater than ever. That’s why BG is introducing BG Biodiesel Fuel Conditioner, Part No. 240. It’s a versatile fuel supplement formulated to stabilize and protect diesel engines against moisture contamination and corrosion which can cause microbial growth. It also reduces the risk of fuel gelling in cold temperatures; so it won’t plug up fuel filters and pumps.

“BG Biodiesel Fuel Conditioner is BG’s response to the major deficiencies of biodiesel,” Mike says. “We’re one of the few companies with an additive specifically for biodiesel and ours is the best solution on the market!”