Clichés survive because they are true, such as the one that says a picture is worth a thousand words. Look at the accompanying photos of the inside of a 250,000-mile engine taken out of a delivery van owned by BG distributor Tom Hickey of Tonda Enterprises, Midlothian, Virginia. 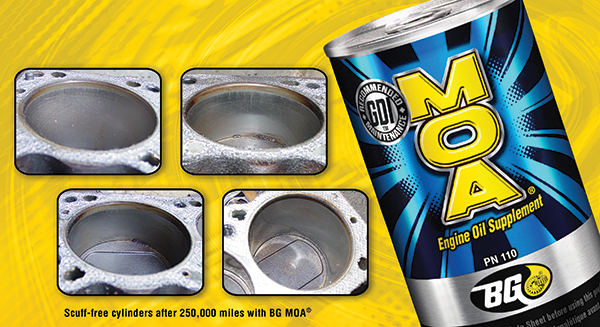 Tom’s 1997 Dodge 250 delivery van was diagnosed with a burned exhaust valve on cylinder number five. It was found that the injector system was firing too lean, which heated up the cylinder and the exhaust valve.

Scott Allen, coowner of Bon Air Shell in Richmond, Virginia, recommended installing a new engine. But when Allen took the cylinder head off of the old engine to check his diagnosis, he was stunned to find the engine was clean and all of the lands and rings looked like new. “This, once again, proves that regular use of BG products and services really work,” Tom said.

Shock and awe
Scott, a 25-year automotive technician and a five-year BG customer, wrote in his letter to BG President Galen Myers, “I knew Tom was religious about maintenance. When we removed the cylinder head, we made a most fascinating discovery. What we found shocked us so much, we almost forgot to check for the burned valve.

“The cylinder walls showed no signs of wear. I was so amazed I got my camera and took pictures to prove that this engine still had signs of the original honing in the cylinders. There was no lip above the rings in the cylinders and no scratches or scoring at all. This engine, with the exception of the bad valve, was in the same condition as when assembled, but with 252,000 miles. A quarter of a million miles with no apparent wear. I knew BG MOA® was good, but seeing is believing.”

Tom says he has another van that has 265,000 miles on it. “All of our vehicles get the required maintenance, oil changes every 3,000 to 5,000 miles, other services are done on time or earlier. And of course, we use BG MOA® at every oil change.”

Engine stars on TV
Tom has highlighted the teardown on the weekly TV show he airs on the local Fox TV affiliate.

Like the wary scientist he is, Mike Belluomo, BG’s Product Technical Services Manager, says he has seen the pictures and the result is something expected with regular use of BG MOA,® but it is not a controlled study producing critical evidence.

Still, Mike says, fleet tests conducted by BG that duplicate the severity of use consistently show that “those are the type of results we typically expect. With proper drain intervals, BG MOA® maintains engine cleanliness and preserves the integrity of engine parts. It brings the level of protection up so it never compromises the engine oil.”

So here’s another cliché your mother may have drummed into you, “Take good care of your stuff and it will last forever.”